Pamela Allen is a fabulous New Zealand author. She is an award-winning author and celebrated illustrator of children’s books. She has won and been shortlisted for numerous awards, including the prestigious Margaret Mahy Medal (2004). Allen also won the Australian CBC Picture Book of the Year for two consecutive years, in 1983 and 1984, for Who Sank the Boat, and Bertie and the Bear. Allen’s books have been published around the world, and have been translated into French, Swedish and Japanese. Some of her other titles are Belinda the Cow, In Mary Elizabeth's House and the series of books about Mr McGee.

Her stories are being brought to life by Capital E Theatre. They are performing in New Plymouth on the 3rd and 4th of June at the TSB Showplace. Check out Ticketmaster for ticket information. 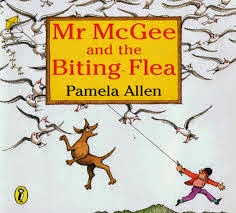 Posted by Laurie Kinaston at 01:29 No comments: